TO PREMIERE EXCLUSIVELY ON DISNEY+ ON NOVEMBER 25

the Stories and Secrets Behind Every Song from the Critically Acclaimed 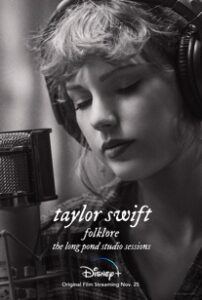 BURBANK, Calif. (November 24, 2020) – Taylor Swift, Aaron Dessner (The National), Jack Antonoff (Bleachers) and Justin Vernon (Bon Iver) created an album that crossed genres — a musical journey that allows us to cry and laugh, and during these trying times, makes us feel like we’re not quite so alone. They recorded “folklore” thousands of miles apart from each other and had never been in the same room together…

“folklore: the long pond studio sessions” was filmed in upstate New York in September 2020 and will premiere exclusively on Disney+ on Wednesday, November 25, at 12:01AM PT. Taylor, accompanied by co-producers Aaron Dessner and Jack Antonoff along with a guest appearance by Justin Vernon (Bon Iver), performs each song in order of her critically adored, five star album, “folklore” and for the very first time, reveals the stories and secrets behind all 17 songs.

“folklore: the long pond studio sessions” was directed by Taylor Swift and filmed on 6 x Lumix S1H mirrorless cameras with Leica lenses embedded in the studio, along with a one Alexa LF with an Angenieux 24-290 on a Furio robotic camera with 30+ feet of curved track.

Disney+ is the dedicated streaming home for movies and shows from Disney, Pixar, Marvel, Star Wars, National Geographic, and more. As part of Disney’s Media and Entertainment Distribution segment, Disney+ is available on most internet-connected devices and offers commercial-free programming with a variety of original feature-length films, documentaries, live-action and animated series and short-form content. Alongside unprecedented access to Disney’s incredible library of film and television entertainment, the service is also the exclusive streaming home for the latest releases from The Walt Disney Studios. Disney+ is available as part of a bundle offer that gives subscribers access to Disney+, Hulu (ad-supported), and ESPN+. Visit DisneyPlus.com to subscribe and/or learn more about the service.

TO BE RELEASED ON MAY 7TH - NOW AVAILABLE TO PRE-ORDER HERE Van Morrison will release ‘Latest Record Project: Volume 1’ on May 7th on Exile/BMG. His 42nd record and his most...

Music Promotions recently caught up with #Musical Theatre star #EmilyKenwright as she chats about staring in Everyone’s Talking About Jamie, future plans, advice for...

NEW TRACK ‘STAY THIS WAY’ WITH JIM OUMA FEATURING KES KROSSLISTEN HEREWATCH THE LYRIC VIDEO HERE “Nods to her home country's reputation for anthemic pop as well as a love of...
©